ARS Maquette PRO fully utilizes the capabilities of the OpenType format accessible in OT-savvy applications. It includes many automatic and Stylistic features for all weights and styles, all with Extended Latin language support.
The standard OT version includes the same Extended Latin language support as the Pro version, but without the automatic or Stylistic features.
A PDF is included with each purchase describing the available features in more detail.

This overview does not necessarily show the entire glyph set possible for each feature.

Alternate cap-height alternates to the characters A, E, M, and N to create a Unicase text flow. This feature also makes use of the Case sensitive forms mentioned further below.
This feature can be activated by choosing StylisticSet 2 in InDesign, or Unicase in applications that support it.

A new cut of a complete set of alternative alphabet within each style & weight including numerals and punctuation, proportionally and optically designed for more classical an evenly fitted headlines.
This feature can also be activated by choosing StylisticSet 3 in InDesign.

ARS Maquette Pro includes a large number of alternate characters that effect almost every aspect of the family; from lower case to Caps to Numerals, adding to the diversity and flexibility of ARS Maquette. While applying Stylistic Alternates creates a more playful and more contemporary flow of Upright text, it essentially forms an entirely different and more fluid extra set of italics!
For the Display it offers alternate characters 1, J, Q and lowercase l.
This feature can be activated by choosing StylisticSet 1 in InDesign or StylisticSet 5 — 10 and StylisticSet 12 for individual character replacements. 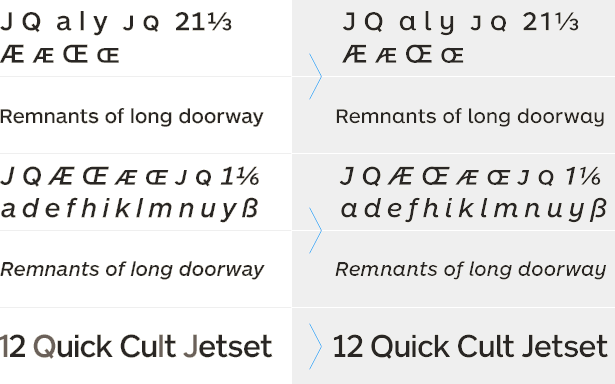 Either by activating Small Caps or All Small Caps in Adobe applications, you can choose to replace only the lower case to small caps, or also the capital letters with some of the punctuation.

ARS Maquette PRO includes a rich set of Numerals that fulfills a wide variety of typographical requirements and style. From a more fluid and natural text flow to mathematical and scientific literature. From menu price lists to corporate Annual Reports. It’s all here: 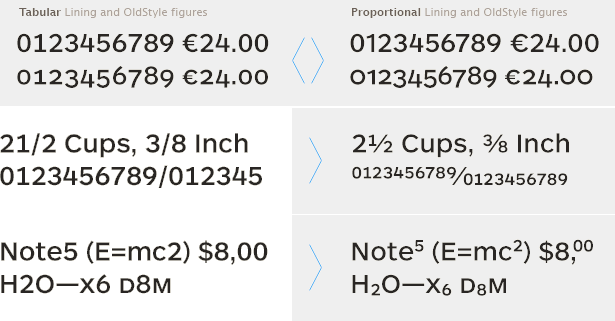 The Ligatures are On by default and are recommended to be left always On in order to avoid optical clashes. In ARS Maquette’s case the ligatures were kept minimal and un-intrusive due to the nature of the design.
The Discretionary Ligatures includes some stylistic ligatures as well as handy automatic arrows replacement activated once the feature in On, using key combinations with hyphen, greater than/less than, and brackets.

This feature replaces certain glyphs with corresponding swash glyphs in a specified context. In ARS Maquette’s case, these are End Swashes that appear only at the end of words to create a more playful and decorative rhythm to your text.
This feature can also be activated by choosing StylisticSet 4 in InDesign.

When All Caps are applied from within an application (not by typing in Caps) appropriate case-sensitive forms are automatically applied. Punctuation, numerals, currency symbols are replaced by their capital forms. The same forms are also activated with the Unicase feature.

A collection of 58 various symbols and ornaments. Once activated they replace their corresponding glyphs.
In InDesign this feature can be activated with Stylistic Set 11. 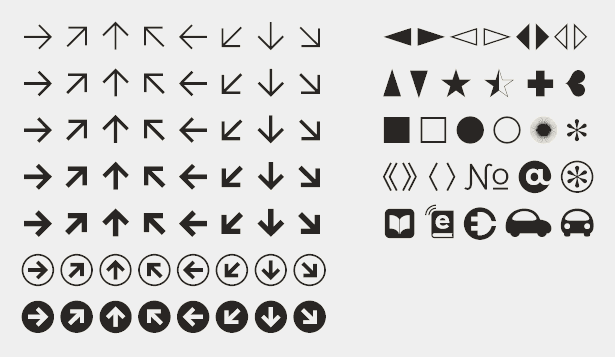 Localized accent forms for Romanian/Moldavian, Turkish and Polish. Activated according to language keyboard layout, or by activating the feature where supported.

Optical alternate lowercase f and t for the Black weights, to make them more legible in small point sizes by lowering the horizontal bar to avoid clashes.
This feature can be activated by choosing StylisticSet 13 in InDesign – available only in the Black and Black Italic styles.